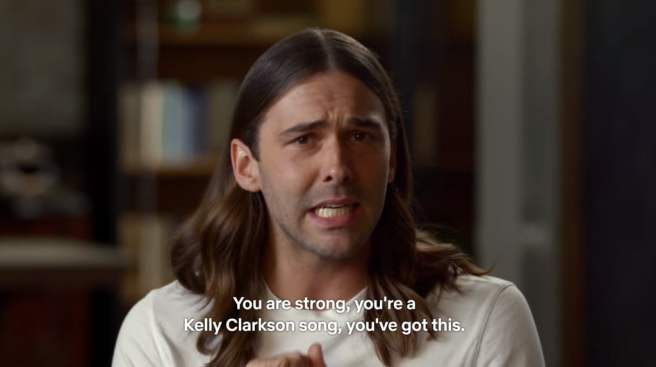 I’m supposed to be on my way out of the house right now to run various errands, but I’ve been watching the new season of Queer Eye all morning and I have to write some things down.

If you haven’t watched Queer Eye, the overarching message of the show is, “you are lovely and you are loved so act like it.” It is very gentle and encouraging and uplifting. The show highlights great people doing great things like loving their families and running business and healing. The Fab 5 challenge those people to do better, not to be better, but because they are better than they are giving themselves credit for.

The episode I just finished was about a man who was very self-deprecating. It is a humor defense mechanism that most overweight people, and people who feel “other” in other ways, adopt and it’s not cute. In the episode Karamo had this man, Robert, listen to what he (Robert) says about himself. Robert realized that nobody else was saying those words, only he was, and that the negative things he was saying about himself weren’t even really that true.

I so completely understand wanting to point out all of the things I’m insecure about, just so you know that I know. It’s something we do to avoid getting hurt. You can’t hurt me by calling me fat because I’ve already done it.

But what I’ve come to learn, and what the Fab 5 are preaching, is that it doesn’t matter who’s saying the words – they still hurt and they are still harmful.

FRIENDS. Do you know how much time and tears I’ve wasted on lies? AND THEY WERE LIES THAT EXISTED ONLY IN MY HEAD. I’m a failure. Nobody could or would ever be physically attracted to me. I don’t deserve financial security. I’m lazy. I’m less than because I’d rather watch TV than go to the gym. Lies, lies, lies. Lies that I was telling myself because I thought it would hurt less than hearing them from someone else. (Even though nobody else was even saying them!)

But we’re not wasting time on lies, anymore. I’m not and you shouldn’t either.

For some reason we believe this: “If I put myself down by pointing out my obvious flaws in a joking way, it will make everyone else feel at ease about those flaws.”

What actually happens is this. First of all, nobody around us notices those flaws because they don’t exist, they aren’t that important, or they are such a small part of us that all of the wonderful things about us overshadow them. Second of all, putting ourselves down makes everyone uncomfortable. Nobody feels at ease when someone they love is talking shit about someone they love. Right?

Here’s the truth. When we know and believe down deep in our bones and soul that we are lovely and we are loved, we are set free from wasting time on lies. We start telling ourselves the truth until we believe it and then we realize all of the wonderful people in our lives who love us and are telling us the same (or bigger!) truths. We recognize the people in our lives who are telling us lies and we let those relationships go. We are comfortable in our own skin and so people are comfortable around us.

When we know and believe down deep in our bones and soul that we are lovely and we are loved, we are set free. To live and love and grow and celebrate and rest. And that is absolutely the truth.