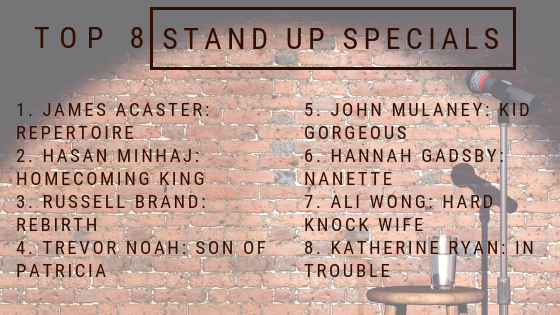 I tend to prefer to read my serious stories and watch my funny stories, which means I watch a lot of Comedy Stand Up Specials on Netflix. There were my eight favorites from 2018!

James Acaster: Repertoire. I had never heard of James Acaster but took a chance on his four part comedy series and instantly fell in love. I laughed harder at James Acaster than anything else in 2018. He has jokes about dried fruit, conga lines, and being in the witness protection program. His jokes are clean with very few curse words and there are nearly four hours of his comedy available in his series on Netflix!

Hasan Minhaj: Homecoming King. First of all, I was nearly distracted by Hasan’s adorable attractiveness. Fortunately, I was able to look past those Bambi eyes and hear his experience and wisdom and humor that he had to offer. A lot of these comedy specials stuck with me so much because they are not just funny stories, they are very personal and human stories about real things and real experiences and real people that open my eyes wider to the scope of human experience. But all while making me laugh. So smart.

Russell Brand: Rebirth. This is basically an hour of Russell making fun of himself. Which I found humble and charming.

Trevor Noah: Son of Patricia. Since I read Trevor Noah’s book Born A Crime I’ve been in love. Like Hasan, Trevor manages to communicate important information in a humorous way. (They are in the same line of work.) I’ve watched all of Trevor’s stand up specials and this one was just as great as the others.

John Mulaney: Kid Gorgeous. I LOVE JOHN MULANEY. I love his delivery and the way he walks back and forth on the stage. I love his voice and his hair and his suits. I love his jokes and his voices and his smile. He’s so funny. I want to watch this special again right now because I love it so much.

Hannah Gadsby: Nanette. Half of the comics on this list are non Americans and therefore have accents different than mine own and I think that’s not a coincidence. I think I’m way more likely to listen to someone talking for an hour if they have a foreign accent. Anyway, I had never heard of Hannah Gadsby before this comedy special but it kind of blew up on the internet and so I watched it. It was funny and also very powerful as Hannah was very vulnerable with all of us. I laughed, I cried, I grew.

Katherine Ryan: In Trouble. Honestly I don’t remember much about this special except that Katherine lives in England and so her daughter has a British accent and named her pet bunny some kind of humany name. But I do remember enjoying the comedy special, so give it a go!

I could also list the comedy specials that I started and quickly abandoned because I wasn’t having fun, but I’d rather focus on the positive. What were your favorite comedy specials in 2018? Honestly I’d love to hear any stand up special recommendations on Netflix.