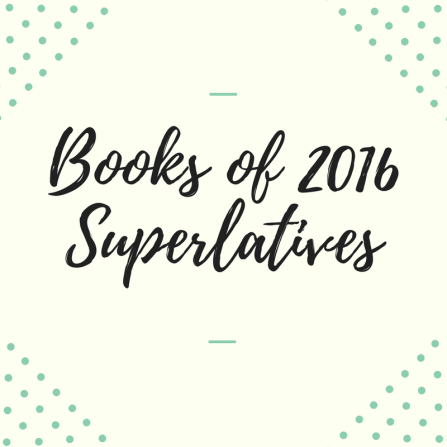 I wasn’t super popular in high school, but I think most people knew who I was. And most people who knew me told me all the time how beautiful my eyes were. At that time I was wearing contacts and everyone would always ask if they were color contacts (they weren’t) and would tell their friends to “check out this girl’s eyes!” My eyes are a nice, bright blue and since I always received so many compliments on them I was so sure I was going to win Best Eyes in our yearbook’s superlatives section senior year.

But I didn’t. The head cheerleader won Best Eyes and I’m still just a teeny bit bitter about it. And since I was so obviously robbed I now enjoy conducting my own superlatives every year! But book-style so that nobody gets their feelings hurt and pouts about losing for the next ten years (and counting).

This year’s 100 books were a great bunch! Of course, no bunch of 100 books is without duds, but let’s focus on the positive (mostly). So here they are – the best and most memorable of the bunch, no head cheerleaders included. 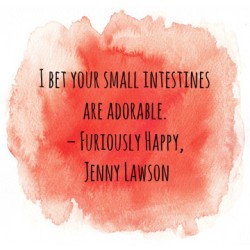 I generally refuse to acknowledge semicolons and everything that comes after them in non-fiction book titles because I don’t like it when things are unnecessarily long, but Furiously Happy does have a semicolon and what comes after it is this: “A Funny Book About Horrible Things.” Jenny Lawson found a way to talk honestly and vulnerably about her mental illness, to shine a light on the hard reality that many people experience, and to also make us laugh our heads off. 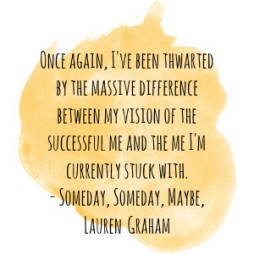 I kind of feel bad that I was surprised at how much I enjoyed Lauren Graham’s book, but
she is such a great actress I thought it would be a long shot that she would also be a great novelist! But she is! Or at least a good one. Someday, Someday Maybe kind of reminds me of season 5 of Glee (is that the one where they all live in New York?). It’s a great twenty something read because it’s about a twenty something figuring out what work and life and relationships and friendships mean to her. V relatable.

Honorable Mention: Mad About Hatter, Dakota Chase – I thought a book about Alice’s little brother going back to Wonderland would be super cheesy, but I gobbled this story up like it had an “Eat me” tag! 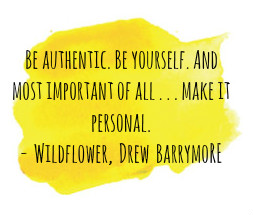 I’ve seen Drew Barrymore interviews, so I wasn’t surprised by the happy clappy mostly nonsensical exclamations that made up this book. What was surprising is that this mess made it past editors and onto shelves. Best of intentions from everyone, I’m sure, but the result is unorganized, uninspiring, and just… well… bad.

SADDEST – Me Before You, Jojo Moyes 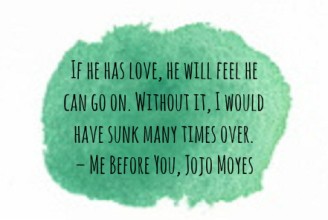 I read this book on an airplane. The fact that I was surrounded by strangers did not stop me from crying like a baby – I was seriously holding back sobs. After reading the book I couldn’t imagine why anyone would want to put themselves through watching the movie! It’s a pretty predictable love story with an assisted suicide twist.

Honorable Mention: This is Where It Ends, Marieke Nijkamp – This one also had me in tears. But if I mentioned all the books that made me cry this year we’d be here all night. This is Where It Ends gets an honorable mention because it was raw and fast paced and despite the fact that I’d only known these characters for 2 minutes, I felt their loss as my own. 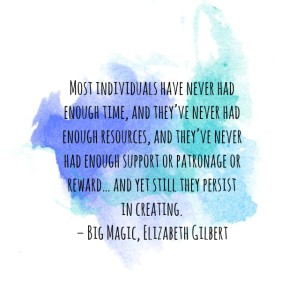 Reading this book reminded me of all the ways I am living a creative life, which is to say I’m living the kind of life I was created to live, even if I have yet to finish writing my novel. Reading this book also reminded me (once again) that there is no magic formula to writing or creating art or to any other part of life. The secret ingredient is always hard work.

Honorable Mention: Tiny Beautiful Things, Cheryl Strayed – I loved this book! Cheryl, or should I say Sugar, delivers wisdom wrapped in love with a touch of sarcasm. It’s a big, brave book of words we should all read.

MOST DISAPPOINTING – The Goldfinch, Donna Tartt 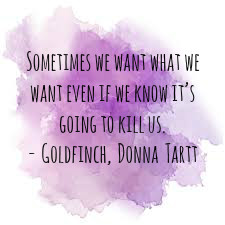 This one is disappointing because I was so invested and so interested for the first half of the book and then I just stopped caring. It all of a sudden became a chore to read. I feel like I was robbed of the end of the story I started in the beginning and instead was handed some boring nothing end of a story where nothing happens. I actually didn’t even finish this book – that’s how little I cared – but I read over 70% of it and it was pretty long so I still counted it on my list.

Honorable Mention: Lizard Radio, Pat Schmatz – This was disappointing because I was so excited to read about a transgender kid in a dystopian future and then it just fell flat. The story had a lot of potential but the execution was weak. 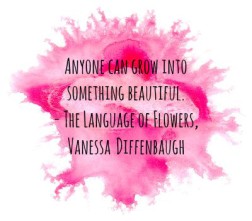 A friend recommended this book to me. She said, “You have to read this.” And I did. I read this book months ago but certain scenes still stick so clearly in my mind. It’s a great book about humanity, flowers, parenting, relationships, regrets, mistakes, and everything that grows. 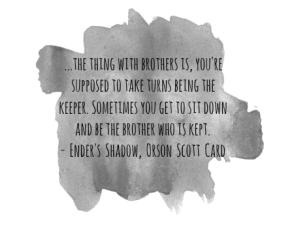 I have been meaning to read this book since I gobbled up the Ender Quintet at the beginning of 2015. These books were really my first dive into science fiction, and I haven’t looked back. Orson Scott Card has created such a thorough world that he was able to write the same story from two different perspectives and come up with two completely different books. I loved going back to battle school, but with Bean instead of Ender this time. 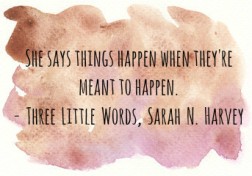 God has grown such a love of all things adoption in my heart, especially over the last few years. I love this story about a boy and his family and all the ways it grows through and because of adoption. I wasn’t ready for this book to be over when it ended. I wasn’t ready to say goodbye to these characters. I wanted more from them, which I think is the very best mark of a good book. 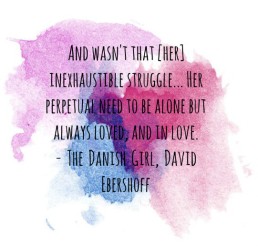 With all of the ignorant and hurtful words that surrounded the Target transgender bathroom decision, this book was a breath of fresh air for me and a hope for education for others. I think that many people don’t understand what “transgender” means, especially those within the church, but this book tells the story of the first transgender woman to receive gender reassignment surgery and it’s not a medical book or a position piece.. it’s just a story.

*I do feel it’s necessary to point out what a GoodReads reviewer pointed out about Einar – he probably suffered from some sort of identity disorder, as he did report feeling like two people, not just a woman in a man’s body. I imagine this is not every transgender individual’s experience. 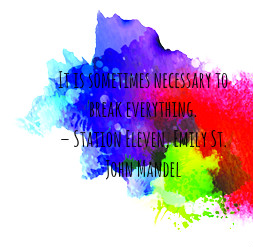 I’m still riding the dystopian future train! It’s a bumpy ride – there are a lot of repeated ideas and images – but still lots of fun. This was my favorite dystopian future of the year. It was a bounce around one so we got to see the days leading up to the “end of the world” and then how society had adjusted years down the road. This story also features a traveling theater troupe, and it was a nice change of pace to see a slice of dystopian entertainment that didn’t involve murder. 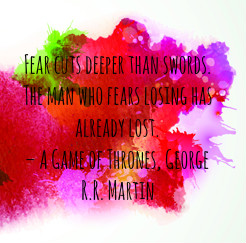 I mean, duh. Right? It’s epic and sweeping and heart breaking and thrilling. It’s an adventure in a book, that’s for dang sure. There are so many characters to fall in love with and hate and cheer for and befriend and mourn. It’s a whole new world Martin has created! I have not watched the show (too much sex and death for me to want to watch) so I only know what has happened in this book, but I’m sure it’s a wild ride from there! 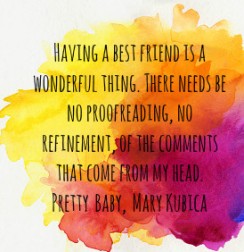 I’m not sure what I’ve been doing my whole life that I haven’t been reading mystery thriller/crime books. For some reason I thought I wouldn’t like them even though I eat up episodes of CSI and Criminal Minds like it’s my job. Not that I would actually want any of that to be my job, but you know what I mean. I just love a good mystery! And I’m the perfect reader for these kinds of stories because I never see it coming. I’m always surprised. My jaw always drops. But Mary Kubica’s Pretty Baby really surprised me in the end, which is why out of all the amazing mystery thrillers I read this year (and there were quite a few) this wins the best.

Honorable Mention: Crash and Burn, Lisa Gardner – I read four Lisa Gardner books. They’re like reading episodes of Criminal Minds and I’m in love. This one was my favorite, but all the ones I read this year were excellent. 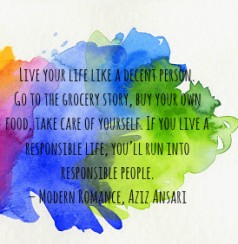 This book was a contender for Surprisingly Good and Funniest as well. Aziz Ansari is just hilarious and I definitely read the book with his voice in my mind the whole time. But not only is Modern Romance funny, it’s packed with legitimate and accurate information on the realities of romance in the 2010s. Aziz did his research! And he has some really great things to say.