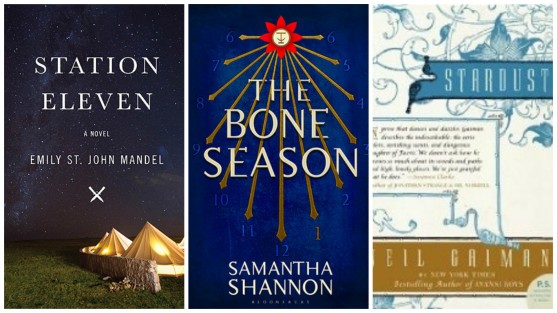 *Really Fiction means that these books are fantasy, sci fi, dystopian guys. Their stories take place in worlds similar to our own but with key differences.

Station Eleven by Emily St. John Mandel is the story of what happens when a rapidly spreading plague significantly affects the world population, nearly wiping out humanity. The main characters and their stories cover a period of many years, from the beginning of the plague to over ten years later. I enjoyed jumping from one story line to another and was never bored or itching to get back to one character or another. This really stuck out to me since in books 1-10 I read Wool, which also has multiple story lines and while reading Wool I definitely found myself rushing through one story line in order to get back to the one that interested me more. Emily SJM did a great job building this world from many angles and viewpoints while still moving story lines forward.

The Bone Season by Samantha Shannon really impressed me because the idea of young people who can manipulate spirits and immortal sexy beings could’ve gotten real cheesy real quick. Plus the first couple pages of the book are just flow charts of different types of clairvoyants. I was all, “I hope I’m not expected to memorize all of this!” and then moved on to Chapter 1 without so much as a glance at those charts. BUT Shannon won me over quick. I was able to enjoy the story (in fact, be captivated by the story!) without knowing all the types of clairvoyants and Shannon filled me in on the details when they were pertinent to the story line.

Last year I watched Stardust the movie with a friend and just adored it. When I saw that it was based on Stardust by Neil Gaiman, I knew I wanted to get my hands on that book because, well, duh – Neil Gaiman. The book did not disappoint. I love Gaiman’s imagination and simple delivery. This is a fairy tale love story with some jealous murdering and crazy old witch transformations thrown in for fun. 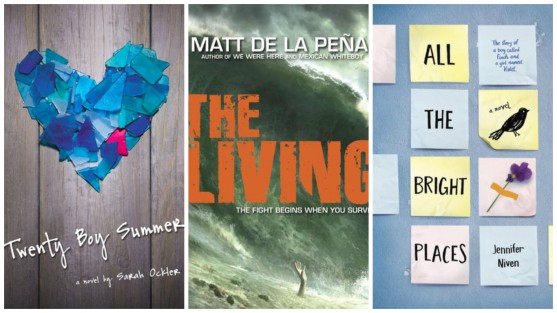 I’m still trying to figure out why I put Twenty Boy Summer by Sarah Ockler on my TBR read list. Maybe I just wanted a fun no-brainer read? I’m not sure. In any case, this was the only book of the bunch that I didn’t like. Which is interesting because I ate it up. I wanted to read it and keep reading it. But I didn’t like the story line or the characters or the message or the implications. It’s repetitive and uninventive and, in my opinion, doesn’t promote a healthy self esteem or respectful body image. I wouldn’t recommend it to anyone, especially not a teenage girl.

The Living was the second book I read by Matt de la Peña and now I am officially a M de la P fan. My favorite thing about Matt is that his teenager characters actually talk like teenagers. Oh my word it’s such a breath of fresh air. I can’t help but wonder if it’s because he’s writing characters from the street (both Mexican Whiteboy and The Living star half white-half Mexican teenagers from low income families) and not fancy suburban white kids named Theodore and Augustus. Or maybe M de la P is just a really great dialogue guy. Maybe I just have a totally inappropriate crush on teenage Shy (the main character from The Living). Anyway, I loved reading this, especially the first half, which was just like teenagers chilling and “I have a huge crush but she’s got a boy back home” drama and then the second half was like DANGER DISASTER SURVIVAL MODE but somehow they flowed and connected and I totally bought it all. More Matt de la Peña please!

All the Bright Places by Jennifer Niven is described as The Fault in Our Stars meets Eleanor and Park! And I’m all, “Why do we keep comparing books like that?” My favorite part about this TBR list challenge is that I just have a list of book titles and authors and the genre and I just pick the next book I am going to read from that. I haven’t been looking at the summary often, just clicking on an available title and starting to read. So I didn’t have any preconceived John Green (for the record, not a fan) notions going into this book. I was kind of blown away. But in a small way? I never see anything coming, so the end got me, and I liked living life through Theodore Finch’s eyes (or at least, I appreciated it), but I can definitely see how a book about two teenagers struggling with depression and suicide might not be great for every teenager to read, especially as the characters seem to be one-dimensionally their mental illness (as one review pointed out), which is a dangerous portrait to paint. All that to say, it’s being made into a movie and if Logan Lerman is cast as Finch I will be first in line to see that sucker. 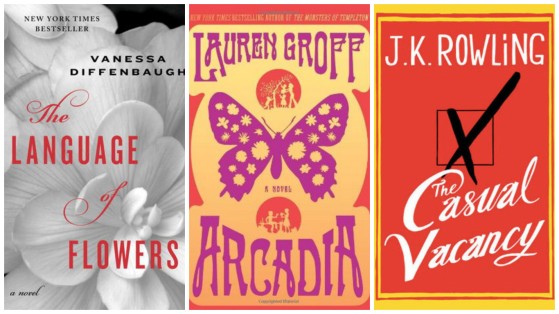 A few months ago a friend posted on my Facebook, “You have to read The Language of Flowers by Vanessa Diffenbaugh.” And she was right. I did have to read it. Oh I had to read it! It’s about a girl aging out of foster care completely uncapable of caring for herself. It’s about that girl’s love of flowers. It’s about context. It’s about history and how hurting people hurt people. It’s about flowers! It’s about relationship and fear and opening up and being dependent and stepping up to the plate and backing down again. It’s about life, man! And flowers.

Arcadia by Lauren Groff is about a hippie community. And what happens when the community falls apart. It’s a long one, and for a while there I thought, “Wow, this should’ve ended a while ago,” but then it came around again and I came around and realized that Bit’s story, which starts when he is a young child living in the community with his parents, needed to be told all the way to the end. It’s not enough to peer through the curtains of the hippie van into a snapshot of an eccentric lifestyle. You have to see that stuff through.

I finally read JK Rowling’s The Casual Vacancy! My first thought was, “How could someone who dreamed up Dobby the house elf also dream up that many f-words?” My second thought was, “This story is awesome.” Okay so it’s about small town government which sounds super boring but it’s actually about people and the relationships between parents and their children and wives and their husbands and teenagers and their friends, which is all super interesting. Of course, it’s NOTHING like Harry Potter, but I enjoyed it all the same. (Free PDF of The Casual Vacancy) 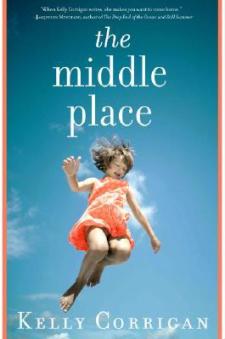 I like audiobooks of memoirs. Just about any other book I’d rather read myself, but having someone read me their own story is just really nice. Especially when it’s Kelly Corrigan reading her story, The Middle Place. The last memoir I listened to was Mennonite in a Little Black Dress (mentioned here) and the whole time I was all, “Why did she write this?” and then listening to this audiobook I was all, “This lady had some great reasons to write a memoir.” The narratives of past and present worked really well together without being repetitive. I appreciate the presentation of a great married couple who likes each other and now I feel like I really know (and love!) the Corrigans! I was sad when the book ended because I felt like I was saying goodbye to friends. Kelly did a really great job being vulnerable and honest and real and sneakily inspiring. I recommend this book to anyone who is just looking for a great (and true! and inspiring!) story.