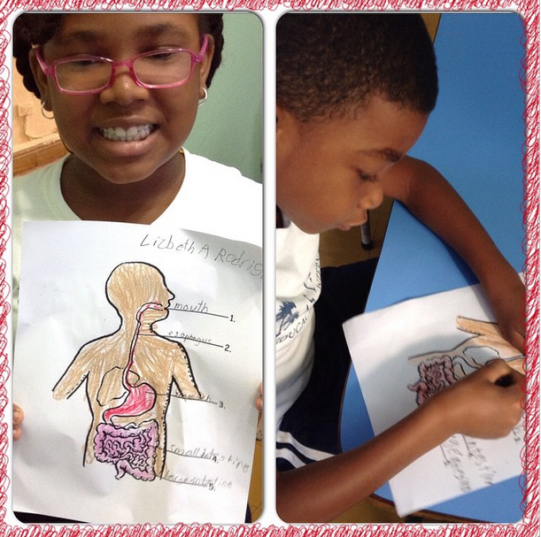 When I was interviewing for teaching jobs during my last year of college, one question I asked each school was, “How much of your student population is made up of natives?” I did not want to move all the way to Honduras just to teach American kids, when I could’ve just as well stayed in American and taught Honduran kids. Bless the Lord, some people are called to teach ex-pats and missionary kids, but that just isn’t me. When I heard that Las Palmas student body was made up of almost entirely Dominican students, I knew I wanted to hear more.

My students are beautiful. Each and every one of them. Dominican kids are the cutest kids I’ve ever seen. And the thing I love most about looking around my classroom, is that there are no identifying features of these cute little Dominicans. One of my students has skin lighter than mine, with big, gorgeous brown eyes and almost blonde hair. Another of my students has dark, dark skin and phenomenal cheekbones. Some of my girls have long, thick hair that they wear in pony tails and held back with headbands. Some of my girls have shorter hair that they wear in braids and twists with beads and hair balls. (What do you call those hair holders that have two plastic balls with elastic in between them? I call them hair balls.) Some of my boys have their hair shaved so close it’s barely there. Some of my boys have curls I like to play with and big, round cheeks I like to squeeze (and smooch, so they’ll squeal).

Last year I watched a video about Robinson Canoe (whose niece is one of the little ladies in my class) and San Pedro de Macoris. He’s from here and he comes back quite often. The video featured one of Canoe’s trips back home. He was handing out toys to the kids in his neighborhood – dump trucks for the boys and baby dolls for the girls. And you know what? Those baby dolls were white and blonde. Now, like I said, Dominicans are a pretty diverse looking bunch, but the majority are not white and blonde. Yet Canoe’s baby dolls were not an enigma. I have never seen a brown baby doll or Barbie in this country in my almost three years.

Last week I shared on Instagram a couple pictures of students coloring a person brown. I shared how happy their worksheets made my heart because all year long I’ve watched my brown students color people peach. I’ve watched them color dentists, themselves, and Jesus all fighting over the color de piel (“skin color”) which is peach. I’ve challenged them with, “You don’t look like that!” and “My dentist doesn’t look like that! Does yours?” and “Jesus probably didn’t have blue eyes.”

Why don’t these children have brown baby dolls?

When I first started watching Criminal Minds it took me a while to get a grasp on everyone’s names. You know, all those crime shows kind of start to blend together (I’m partial to the original CSI and Criminal Minds, obviously). So I referred to Morgan as “hot black guy” and Reid as “hot white guy.” My hot guy appreciation knows no color, people. Well, after watching eight seasons in one semester (thank you, Netflix), I definitely got their names down and I developed a love for the show and the entire cast of characters. That’s what’ll get you hooked on a crime show. There are so many to choose from! The one that sticks in your mind is the one to whose cast of characters you form a connection.

I love Penelope Garcia for obvious reasons. Aaron Hotchner is comforting and always the calm in the midst of any storm. JJ is tough and smart and works hard. And yes, Morgan and Reid are physically appealing, but I’ve learned to love them for so much more than their bodies and faces.

This afternoon I watched an episode where a teenage boy is involved in murdering prostitutes. True to his psychopathic nature, this guy started out killing animals. The teenage boy’s partner’s MO is using a hammer. The local cops had talked to a teenage boy, named Jose Aguilar, who had been attacked by a man with a hammer. Jose didn’t want to give the cops any details, but when Morgan, Reid, and the gang heard about the hammer they wanted to talk to Jose. So they brought him in.

Jose had been kicked out of two schools and was new to the area. He sported a shaved head, an I-don’t-care attitude, a really cool jean jacket, and a neck tat. The first thing he said to Morgan and Reid was, “I didn’t do anything and I don’t know anything.” He assumed that they assumed he was guilty of something. Morgan, being the compassionate guy he is, tried to connect with Jose. He says something like, “I understand, man. Growing up where I did we didn’t trust the cops either. But we’re not those kinds of cops.” Jose didn’t buy it. He was all, “Oh, you think you can relate?”

Then Reid, skinny, white, ridiculously smart Reid, said, “I think I can relate.” Jose was all, “I doubt that.” Because looking at Dr. Spencer Reid and punk kid Jose Aguilar, you don’t see a lot of similarities. But Reid said, “It’s because when you look at me you jump to a particular set of conclusions. It’s human nature to make assumptions based on appearances… In this modern era, those assumptions tend to be very wrong and often quite hurtful. It happens to me a lot. I bet it happens to you all the time.”

A friend and I were talking yesterday about being color blind and how completely off base that mindset is. It’s the natural pendulum swing far and away from racism. Instead of making assumptions about someone based on their appearance, let’s just ignore their appearance altogether. But that’s not a good idea, either. What we have to do is celebrate each other. For everything we are and everything we are becoming, physical appearance included.