Sarah Bessey wrote a blog post in December called “I needed to see her.” In it she talks about the women who have gone before her, the women who stand before her and inspire her and challenge her. She talks about the women she needed to see serving God and their families and each other. She talks about how seeing those women do their thing gave her permission to do her thing. Her words rang true and deep in my soul. Oh the beauty of a woman doing her thing. Oh the empowerment of “me too.”

There have been women I needed to see. These are some* of them. 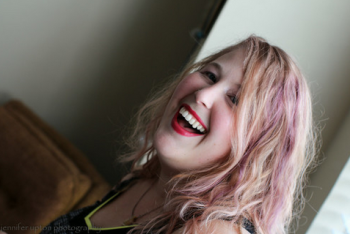 This is Elora Nicole and she is a Writer Warrior Story Teller. I have never seen her in person. In fact we have only exchanged a couple of e-mails which I’m sure were unremarkable for her, since they included, “HELP!” and “What do I do when…?” from me and bold encouragement and practical advice from her. I say they were unremarkable because that is what Elora does. She offers bold encouragement and practical advice to writing women. More than that she offers validation. She says my story is worth writing. But before she said that she said her story was worth writing and then she wrote it. I needed to see Elora be strong and vulnerable in the process. I needed to see her finish and offer up the world her soul in words. I needed to see her telling women like me to Write fire.

This is my friend Vicki (and me!). I met Vicki when we were both working at Inside Out Child Care in Springfield during our college years. Even though we were both college students at the same time, Vicki is a few years older than I am. That is because instead of going to college right after high school she went to the mission field and lived overseas for something crazy like seven years. After working together for a while we lived together with another friend in a great house in the neighborhood where we all worked. Even though I only lived there for nine months, I think of that house in Springfield as one of my great homes. In that home and in that neighborhood I got to see Vicki love people fiercely. I saw her love her God fiercely. I saw her love learning and language fiercely. I saw her love me fiercely. And I needed to see all of that. But what I really needed to see was Vicki, in blue jeans and bare feet, preaching on Sunday morning about the Voice of God. Because where I come from women don’t get to speak in mixed company and they certainly don’t get to do it in blue jeans and bare feet. But you never could tell Vicki what to do, and I needed to see that, too. She takes her cues from the Voice of God, which is why she was the one who got to preach about it. I needed to see her speak with authority, authority she had earned through study and prayer and experience, and passion and laughter. I needed to see her painting and reading and crafting and scheduling and washing clothes and pulling her hair out in frustration and forgiving herself and forgiving others and forgiving me. I needed to see her love people all over the world. I needed to see her be a single woman missionary and I needed to hear her stories. God sent her to me or sent me to her or crossed our paths or let us run into each other or whatever He did at just the right time. He knew I needed to see her.

*You guys, this world is full of so many awesome ladies I needed to see. Maybe this needs to become a regular thing. Maybe I should talk more about the crazy great people in my life, male and female. Maybe I should embarrass my friends more by taking pictures from their Facebook and putting it on my blog and not telling them I’m writing about them. (Surprise!) Maybe we should encourage each other more face to face and life to life with real live words that make us feel good to be alive.