Even though the Dominican Republic doesn’t celebrate Halloween, I have been feeling particularly festive this year. I’ve been watching Halloween movies and eating Halloween donuts and playing Halloween bingo. It’s been real. And even though I am not dressing up this year, if I were dressing up I’d totally go as Leslie Knope. I’d have the pants suit and the blonde, curled hair and a big KNOPE button. It’d be great.

But I’m not dressing up this year, so instead I’m looking back at my most recent costumes. I recently remembered how I used to have a hundred livejournals (I seriously had at least six different accounts throughout high school and college) and how I used to always post pictures up on those things. So I dredged my memory for one of my old livejournal usernames and JACKPOT! Lucky for EVERYONE I now have access to so many pictures from high school. And I’m going to find reasons to re-post them on the internet world for all to see. Starting…. now.

Here are a couple gems from Halloweens-past.

This picture never gets old. For Halloween during our junior year of high school my friend Jake was Fred from the Mystery Gang (you know, Scooby Doo and his pals) and his girlfriend was Daphne. Well this is me being Jake being Fred! I am sitting in Jake’s car wearing his costume wig and costume ascot pretending to eat Cool Ranch Doritos because Jake loved those (obviously, I mean, he kept them in his car). Also my facial expression is really good. Classic.

This was my costume my junior year of high school. I was jellybeans, obviously. And my friend Mattie was Rainbow Brite. At this year’s Halloween party my friends’ band came and played in my basement. Also, am I the only person who kind of misses those brown clogs (that sucked in the winter because the back of your feet got all wet from the snow)? 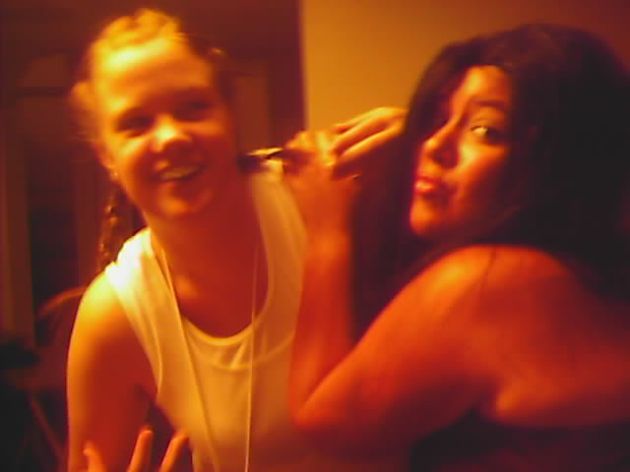 For Halloween my senior year of high school I was Flavor Flav (“FLAAVA FLAAAVVV!”) because that was when his show Flavor of Love was really popular. My friend J’aimee was Flavor Flav’s main squeeze, New York. Looking back at Flavor of Love I wanna be sad because of all of the woman-objectifying and stuff (he literally insisted on making up nicknames about them that were most likely not based on fact but rather on assumptions and their physical appearance instead of remembering and using their actual names) but it was just so ridiculous! It’s hard to take any of it serious, even in retrospect.

Honestly that’s about as far back as my digital Halloween memories go. I don’t think I’ve ever seen my mom take a picture of anything in her life so we don’t have a lot of pictures of my childhood. I do have the memories though. So many memories of procrastinating costume ideas till the last minute (my mother and I share the gift of procrastination). I think for two years in a row I just wore my grandpa’s hunting camo and said I was a “soldier.” Good times.

NaNoWriMo starts tomorrow!! Let’s do this.